Dr. Thornton joined the Ear, Nose & Throat Center in 1977. He received his medical degree from the University of Arkansas and completed his specialty training at Tulane University. Dr. Thornton is married with three children and three grandchildren. 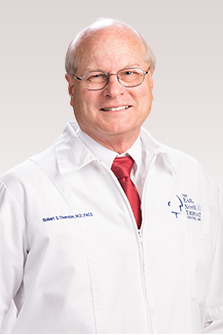 COVID-19: WHAT YOU NEED TO KNOW

To protect the safety of our patients and our staff, we will be limiting our practice to our Line Avenue location and will be converting the majority of our appointments to TELEHEALTH visits. Telehealth visits are covered by most insurance companies and Medicare. A smart phone or computer with video/audio capabilities is all you need. No apps needed.

We are here to take care you and your family as we work through these troubling times. Face to face appointments will be conducted as needed.

We are also offering drop off/pick up service for hearing devices needing repair, cleaning, and/or trouble shooting. Our allergy department continues to provide patients with their allergy serum via mail/pickup. In-house injections are suspended at this time.

Looking for a ENT Doctor?